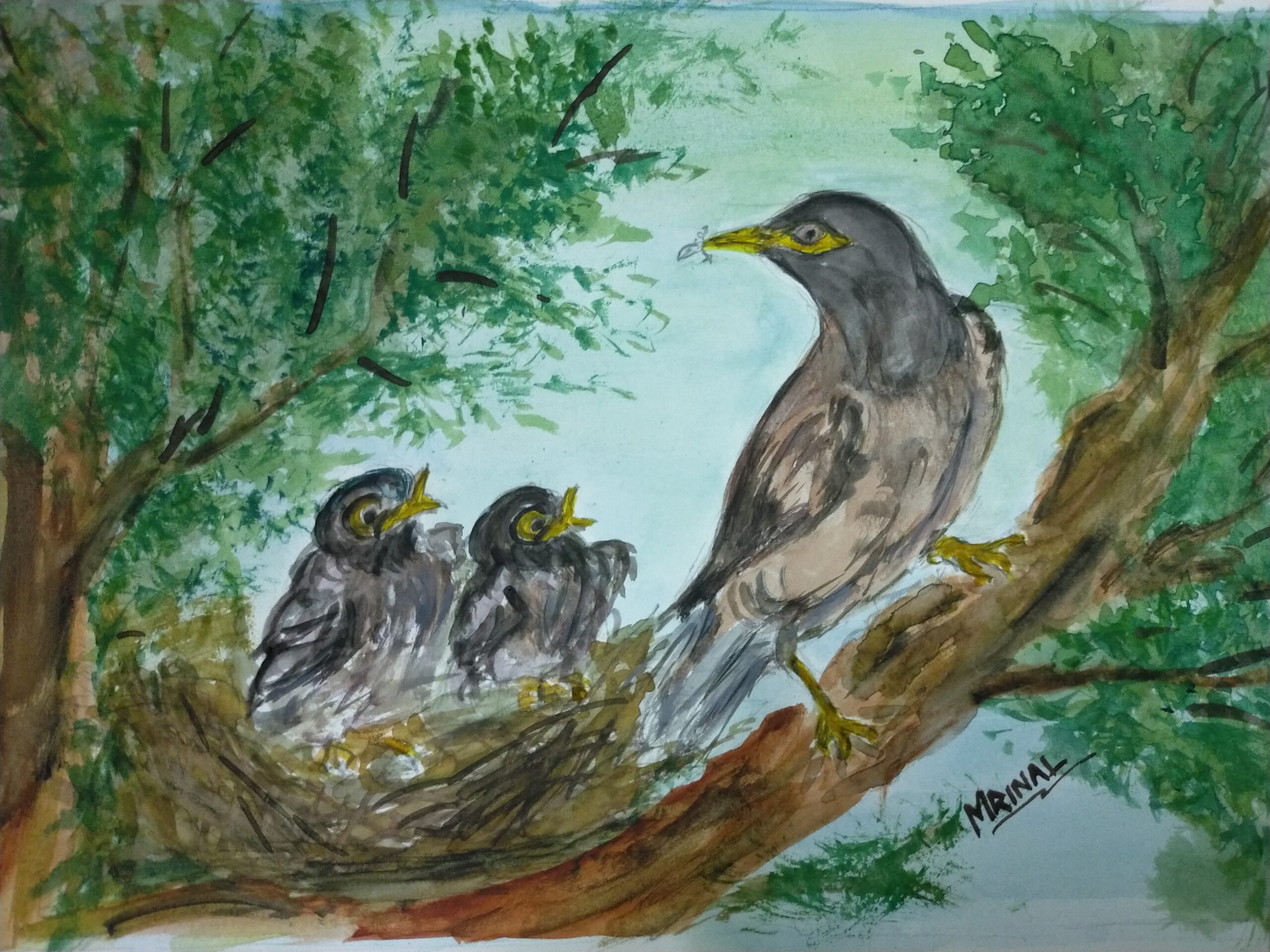 The Myna family offers a different understanding to this writer, wife of an army officer posted some where in Indian — Editors

I noticed a pile of boxes on top of the electrical distribution board. It caught my attention because every time I would climb up the stairs and reach the landing, I would hear a flutter. Upon checking, I found out that a common Mynah (starling) had been successful in using one of the top boxes as its nest. I was initially worried about the Mynah family, as our young beagle, Ginger, would scare away the Mynah parents sitting on the railings. We heard chirping.  The young ones would be active most of the day, making soft sounds, which we got used to. It was like a background score that kept playing throughout the day. In fact, we would stop and wait for it at times when everything was quiet. Even Ginger was quite benevolent. The soft chirping of the young ones gradually turned noisy in the second week. I was amazed to see the pair of parents tirelessly moving around, feeding their young, guarding them, constantly on the move without any break or complaint.

I just could not help comparing my life with that Mynah parent! There she was, following ‘Karmanye vadhi karaste, ma’ faleshu kadachana.’ (the most important shloka from the Bhagvad Gita). And here I was, complaining about being constantly busy. My work had increased as there were three men in the house thanks to the extraordinary COVID-19 situation. Two of them were young adults who could be demanding and expected variety in the meals! How I wish we were like those Mynah birds, gratified with whatever landed on the plate. But then, watching the Mynah parents did help. I drew my own lessons as a human and continued with what was on my plate- my responsibilities, without any further complaints. In fact There’s so much to learn from those creatures around us, only if we pay enough attention. So as the days were passing by, I was growing weary of the moment when the young fledglings would learn to fly and leave the nest. One bright sunny evening, my husband and I came back from a walk along with Ginger.  The moment I took a step on the stairs, I saw a timid juvenile starling in the corner. A few stairs above was its sibling. They were staring at me wide eyed.

One of the juveniles fluttered around, gathered courage and flew out into the open. The other one was close to the top landing and was just hopping around. Holding Ginger by her collar, we locked her in and ventured out to help the juvenile.

But then we heard a cacophony. The Mynah parents were close by sitting on a Neem tree across the street. They had been watching every move and disapproved of our teaching lessons. However, my husband, in his exuberance, guided the junior all the way down the staircase and finally out in the open! The Junior kept sitting timidly under the lamp post. Successful that we had finally united the family, we returned and took our positions next to the window, curiously watching the flying lesson in progress. The parents had kept a vigilant eye on their young one and were encouraging it to perch high next to them on the Neem tree. But our Junior was too adamant. It wouldn’t budge. After some coaxing and cajoling from the parents, it finally crossed the road, again hopping, and we lost it in the thick grass on the other side. It was continuous flights of the parents to the spot that made me realize it had fallen into the drain on the opposite side. It was already past six and soon it would be dark. Even the clouds had started gathering and were threatening to pour!

Worried that it might drown, my husband and his buddy, Thakur, went down to help. The moment Thakur picked up the young one to keep it across on the dry patch, the parent came swooping down on him, dive bombing; something that I had only read about but was seeing for the first time. Luckily for Thakur, he dodged and saved himself. The parents, who had been sitting on the Neem tree all this while, suddenly started swooping one by one at every passerby, stray dog, cyclist, anyone, till the Junior hopped to a safe distance into the field on the other side.

All this while, my eyes were searching for the other Juvenile, that had exhibited courage and flown away. There, I suddenly spotted the family of four together on a mound across! One could distinctly make out the two juveniles and two parents. It was almost an hour since we had returned from our walk and had been glued to the window. Finally, we saw the young ones take small flights, and soon the Mynah family moved so far away that they became four dots, merging with the surroundings. I was missing the Mynah family.  After all they had been our constant companions for almost two plus weeks! Within an hour the young ones had learnt how to fly; soon they would also learn to be independent and move on.

Despite knowing the fact that life has to go on, one still suffers from the Empty Nest Syndrome! I suffered it when my elder one joined National Defense Academy.  And, then my younger one left home to pursue his under-graduation. Having experienced that pain, the Empty Nest Syndrome, and having drawn strength from the Mynah parents, the most important lesson I have learnt is that my only job as a parent is to make them independent. All that is in our control is to sit aside like the Mynah parents on the Neem tree and keep a watchful eye!